Long Version:
The opening credits kick off with a catchy song in Mandarin, a group of four guys in school uniforms and a cute girl. From what I can gather in the first minute, there's a bad boy, a violinist, a card player (or magician?), and one who likes tea (or looks up like he is a heartthrob...). They like to play volleyball, blow bubbles, play pool, drink water out of champagne flutes, and have fun being bros. There might be a love triangle with cute girl, bad boy and violinist... There are a lot of heated stares, tender moments, ice cream, wine, London, embraces, a kiss, a proposal? A lot of feels... And a lot of cool coats. More fashion outtakes later. 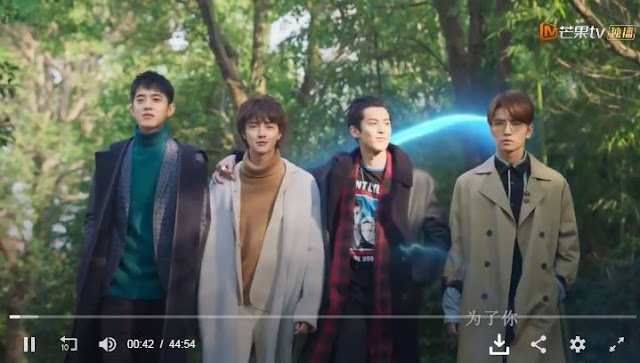 The episode starts with a freeze frame of the cute girl fly kicking bad boy in the cheek. Random items (pens, keys, notebooks, coins, etc.) are in the air, frozen in time. She says that she "never thought something like this would happen in real life". Wait, is this a show about kids with super powers?!

Dong Shancai is out grocery shopping with her mom, who, while handing a fish to the fishmonger, drops and immediately catches it as Shancai looks at her in amazement. Ohhhh, maybe her mom has passed some super powers on to her, but she just doesn't know it yet... but we do know she was accepted into Ming De University's Nutrition Department and eventually wants to help expand her family's catering business.


During their first day, everyone is super excited about their guest speaker, Mr. Bobbitt. I'm not sure what he does or why anyone should care, but he's an old white dude who speaks to them in an odd, dubbed English voice.

The talk is over. Excitement ensues. Girls are freaking out over the four guys! Are they famous? Are they rock stars? Shancai's phone is knocked out of her hands and she's literally crawling on the floor (why?) as she sees a pair of green croco shoes step on and break the screen. (Girl, where is your case?). She runs after the culprit, tries to confront him, but is taken down by security guards who think she is attacking Mr. Bobbitt. She somehow mistook an old white dude for the tall Asian dude who stepped on her phone. Easy mistake? I will note that with the music they are playing, my questions of whether or not someone has superpowers have resurfaced... Back to the events...

We also learn that it's Li Zhen's birthday! Shancai decides to make her a "delicious, low fat cake" for her. What a friend, always looking out... She gives her the cake - no box, so she's expected to carry it around all day? Before that, let's take a selfie with it at the top of the stairs. Okay, now one with just you and the cake... Oh wait, you need to step back so I can get the cake in the shot... Oh shit, she steps backward and falls on the stairs, cake flying down onto DMS's head. He is not happy. Li Zhen tries to apologize, but he is not having it. "If apologies worked, why would we need the police?" Boy has a temper. He pushes her down to the ground. That's when Shancai steps in and calls him an arrogant, green shoe wearing, pineapple head. Uh-oh, he is not taking this well... Grabs her by the neck... BTW, why are his hands PURPLE? Are they filming during Winter in China?! Get him some hand warmers or something!!!... He's visibly angry and finally lets go of Shancai, who understandably, is in shock.

DMS, Meizuo, and Ximen walk away. Lei, the sweetie pie that he is, picks up the birthday card that has fallen by the wayside, picks it up, and hands it back to Shancai with a smile. (First swoon).

Shancai is at her locker and there is a JOKER CARD in there! How it got in there, not sure, but it's there. Shancai is so aggravated that she goes up to the rooftop to scream and curse F4. Little does she know, Lei is up there and hears everything. He's wearing a sea foam green cable knit sweater, gray jeans and sneaks. Umm, yes, I would totally wear that.

She asks why DMS is bullying her and his reply is that he "has no interest in other people's business". Thanks Lei. You are really helpful.

Cut to DMS playing basketball. One of his groupies asks Shancai to take a video of her handing DMS a drink - is this a thing? Shancai reluctantly agrees and takes the video. The groupie gives us the peace sign and gives him his drink (nice product placement)... Instead of acknowledging her, he walks up to Shancai and asks why she is filming her. He then takes the phone and walks away. Not sure we ever find out what he does with it or if groupie girl ever gets it back...

We are now back at Shancai's home. Her mom has just gotten a big delivery which Shancai will deliver. She rides her bike to an empty cafe and uh oh, DMS is there, looking sinister (but still cute) holding a cue stick. He acts like an arrogant jackass and is such an asshole that Shancai calls him a "parasite of society". He is not happy and throws the food at her. WTF, DMS? He looks slightly ashamed, but ultimately blames it on her. Poor thing is covered in sauce, leaves, and stops at a faucet to clean off before she goes home. This is when two hooligans start harassing her when LEI SAVES THE DAY! Wearing a different sea foam green sweater!

Hooligans run away and he comforts a crying Shancai by letting her use his handkerchief and doing a handstand. Of course, that's what you do when you comfort someone. His rationale being when you feel like crying, do a handstand so that your tears won't fall. 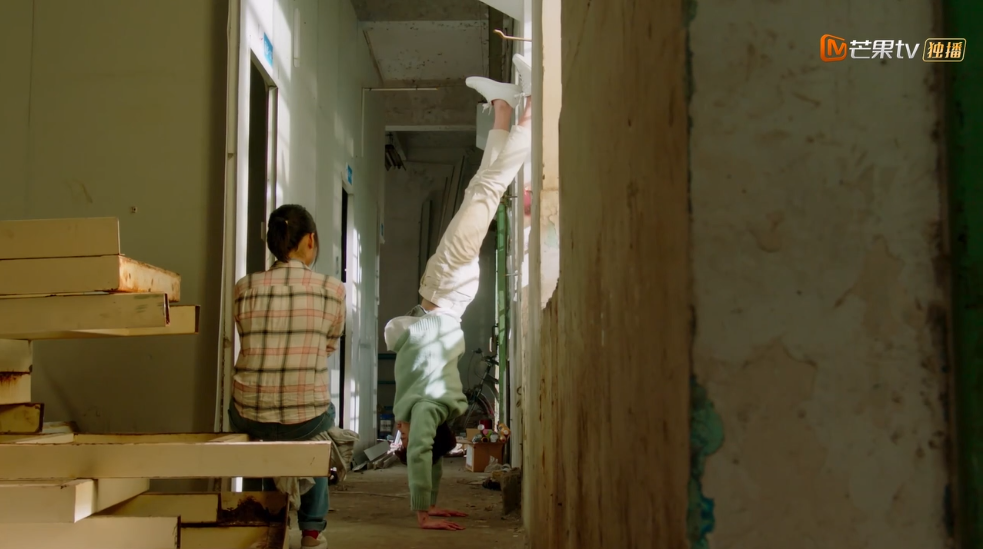 She heads home, steals a neighbor's scarf, and the next morning is ready to fight back! She runs back to school and we are back where we started, with her doing a fly kick onto DMS's face. 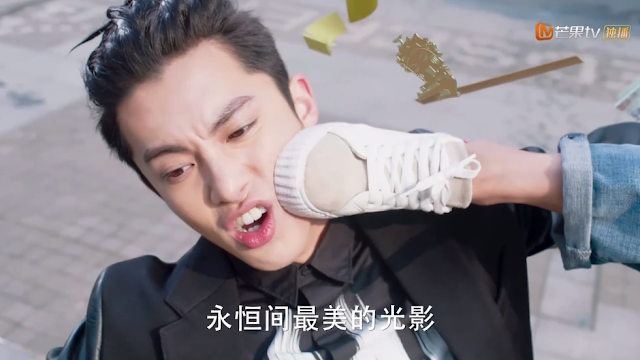