That Lei is sneaky, asking Shancai questions about if she likes Ah Si or him for the sake of bluffing is pretty calculating. Good thing that Shancai strikes back to Lei with a question to him about liking Jing. She seems to be happy at Lei's mention of staying around and doing everyone within his power to protect her. 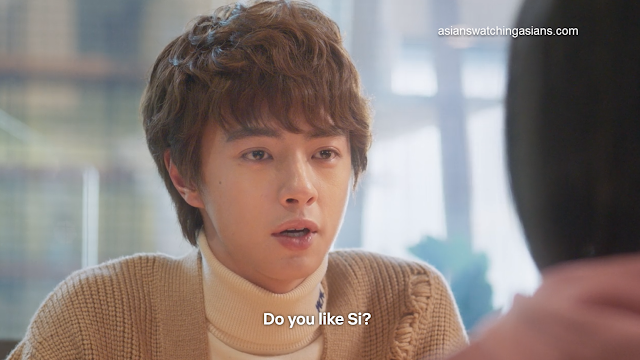 ACKKK! Banana bestie got hit with the lace-up fairy stick, as he sports a blue jacket with lace-up sleeves. 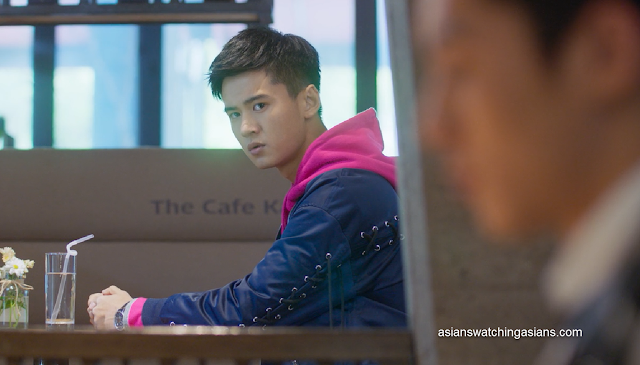 He does have a moment, when he breaks down how love should work. That if you a like a person, you should treat that person nicely, and it doesn't matter if they like you back. It should be enough to see him/her happy. That seems to earn him some Don Juan cred with F4, and silences DMS.

That pink sweater that Shancai wore on her date with Lei has a evil twin sister that's even more...awesome? 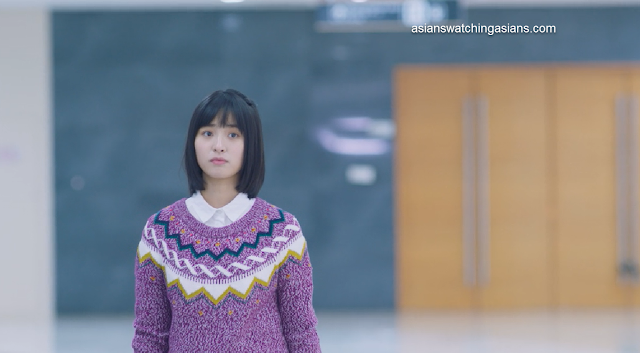 But I guess it's the perfect sweater when Lei grabs her hand to enter the bridge club. Lei is so cool, that he's hot. OK, but not as hot as the glare that DMS gives when he sees them holding hands. DMS can't even look at her. Perhaps it's because he's staring at Lei's coat, which I'm also coveting from home. The rules are given, but what's at stake? 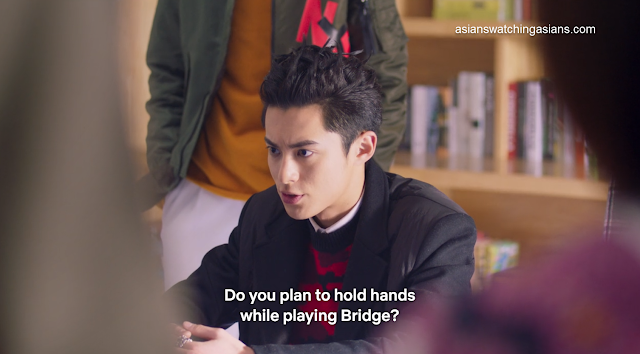 Shancai - it's all about asking DMS to forgive her, assuming that it's inclusive of forgiving her for wearing that sweater.

DMS turns his head to look at her (I know, that sweater right??? Hard to look at for long periods of time. If you're under 8 it's fine, but Shancai go wash that teal sweatshirt and bring that back in rotation) and asks if that is really that important to her. He pensively/aggressively remarks that she just wants to be free from guilt of being in a relationship with Lei. She can't look at him when she says "maybe".

BUT, then when DMS says what happens if he wins? Lei cuts in and says that he won't see Shancai again. What kind of Jedi mind games are in play here?!?

ShanLei against DMS and Meizuo. I don't know how to play bridge - so this sequence is lost on me. Shancai's card mumbo jumbo is not that interesting to me...so instead I admire Lei's coat and the accessories in play. Ximen's coat, DMS's john hardy-esque rings. Not sure I like the rings that much, but I appreciate the effort.

Now this sequence is interesting:
Lei - Shancai you did great
DMS - I never thought that innocent Shancai would cheat
Lei - Even if Shancai cheats, she's still cute. Unlike others who tell the truth, but always hurts people.
DMS - A liar is more despicable, of course. Aren't you like that?

If looks could kill...

DMS seems off his game, distracted by ShanLei's "we" references. Shancai seems to get courage from Lei's smile - barf - and DMS looks back and forth between them. I'm starting to think that Shancai's sweater is part of her distraction strategy. It appears that DMS has the winning card, and everyone seems to know it, but Lei puts it out there that maybe they'll still win. Somehow the stakes have changed. Apparently the loser has to leave the university. Lei taunts him to play his card...and then Shancai also tells him to play his card and says that she'll acknowledge if she loses. She closes her eyes, braces herself and waits for her fate.

The look he gives Shancai is a combination of sadness, sternness, anguish and concern.

The outfit? Winning. He throws the card on the table, says he's not playing anymore and that ShanLei sucks. We are all in agreement. Wait, don't leave!

Ximen declares that ShanLei wins and Lei tells Shancai the truth about Si having he winning card. It's so obvious to F3, but Shancai doesn't understand why he stopped playing, because she's a Da Bendan. But that's ok I guess, because DMZ is waiting for them to celebrate back at the house.

Meizuo (and Banana bestie has the checkered version) decides to take his fashion cues from the lampshade at the dinner party, which seems empty without DMS. 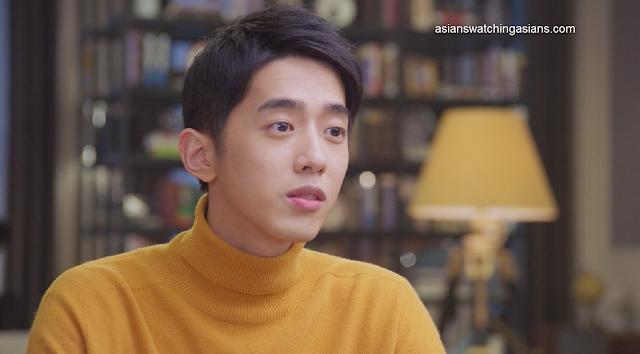 They gambei and you start wondering if Shancai is going to pass out again. But then DMS may be forced to swoop her up again. How romantic. But that doesn't happen.

DMS is doing the scotch stagger in the streets, and almost beats the crap out of a guy and is so confused why he's so sad about a girl. This is also when you see how his shoes make the outfit. #Fire. Even the sky is pink as proof. 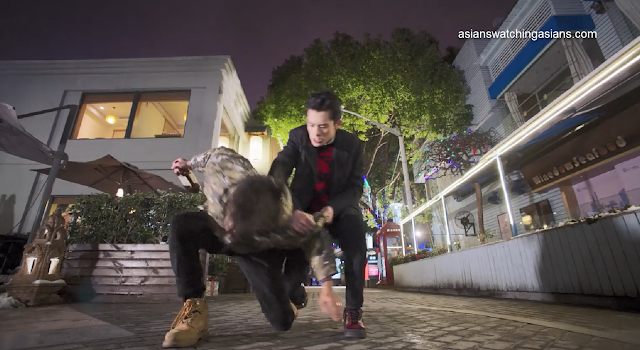 You flash back to DMZ's party and Meizuo and Ximen are spitting out numbers again. OMG - is this another pi challenge again? Apparently they are spitting out phone numbers of ex-GF's. Nice. They want to include Shancai in this game, and Banana Bestie says that there's no point for Shancai to play this game, but then Lei starts saying Ah Si's number. WhaWhaaaat? That look on Shancai's face matches what you can imagine my reaction is to her sweater. 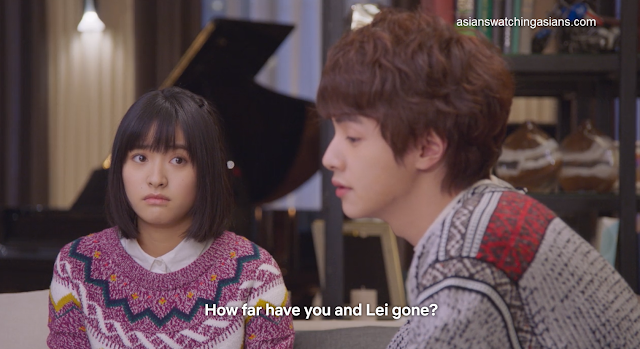 DMZ - in all of her black ruffled glory wants the dating deets for ShanLei and calls it like it is. That Shancai is like a buffalo compared to gorgeous Jing and that Lei - what he did? Is not what a normal guy would do. And then DMZ channels Chris Harrison from the Bachelor and wants to skip to the overnight dates and the fantasy suite. Lei's down with it and wants to speak to her alone. And now it's Shancai's turn for the side-eye. 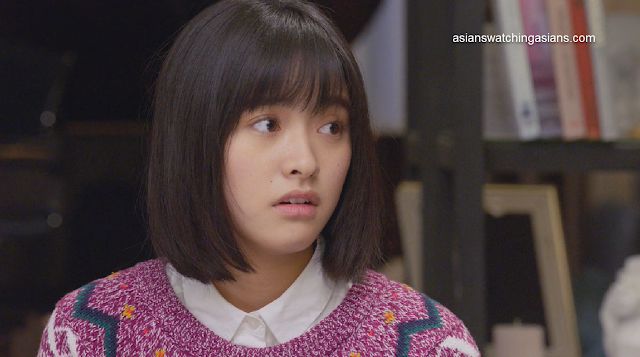 Struggling to make conversation, they end up face and face and I'm even surprised that Lei is doing the Chinese "caring through criticism" when he says she's really ordinary and plain. But in a sweet and sour kind of way, he confesses that that during the card game, when she was serious, she was really kill'n it, and can see why Si likes her so much. BUT, always a but. He doesn't know how he feels about her. The words keep coming out like a thousand paper cuts as he goes on about how Ximen believes that he's just using her to get over Jing. Which might be the truth. I mean Harry Potter is a powerful wizard, so he should know, right?

But Shancai is like "I'm like rubber, and you're like glue, whatever you say bounces off me and sticks to you" when she says she gets it and can understand based on Lei's history with Jing - who does win the cutest kid award for all the childhood flashback scenes. Lei isn't sure if he can love another person again. That's a little dramatic for Lei, but that's ok. Even though he really likes Shancai...WAIT FOR IT.

He knows it's not love. 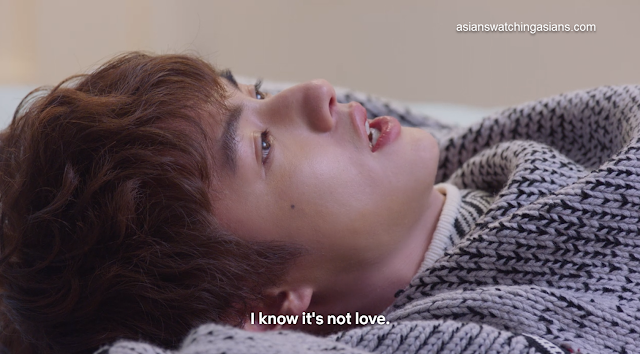 Now that's a face sadder than chalkboard Jing. Rubber says "it's fine, it's fine." and Glue says "Sorry." Rubber wants to know why Glue is sorry and he acknowledges that if he didn't come back, that perhaps Rubber could have been with Ah Si. She casually tells him to stop apologizing since who would want to be with him? And if this didn't happen, then she wouldn't have had a chance to see Lei as he is now, as opposed to "real man' Lei or the person who was cold, distant, and not interested in other peoples' problems. She promises to always be a good friend forever. He sits up from the bed and pinky swears with a kiss on her forehead. WHAT?!?!

DMS comes home and overhears DMZ gossiping about him with F2 and wondering what ShanLei are doing. UH-Oh. Let's just say that DMZ has bigger kahunas than all of F3 in the room, and tells her baby bro that ShanLei are in the Fantasy suite, and if he's a real man, that he should be happy for them. Wow - that's not like pain with a thousand paper cuts, that's like getting neutered by your sister without anesthesia. F2 are shivering in the corner and DMZ with the balls in her hand, asks what DMS thinks, and if there's anything he wants to say. 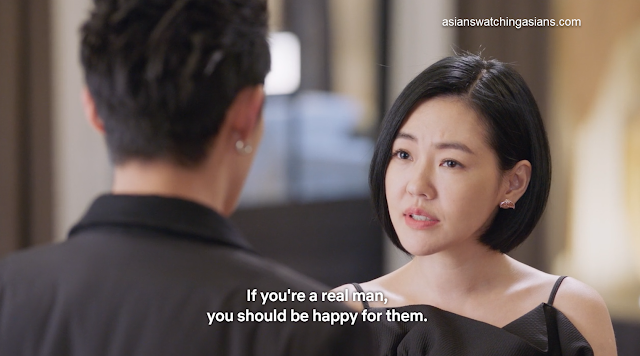 Balls on or off? He doesn't say much, agrees with big sis - but his eyes bare his tortured soul.

Cut to the widely known as the morning before the Walk of Shame. Shancai's inner monologue is grateful for Lei's honesty and knows where she stands relative to Jing, but takes pride in being a weed. Ah Si is standing in the window - like an angel - and it doesn't look like he's slept.

Ximen comes over to check on DMS, and he asks Ximen if he remembers when he took Lei's favorite toy? It's a story about Lei's spiderman, and how DMS broke it when they were fighting over it, and how he never admitted that it was any of his wrong-doing. He remembers not being able to sleep that night, and that he thought that Lei would be mad in the morning, so he arranged for Ximen and Meizuo to bully him. It was at that point, when he realized that he'd never be able to beat him, and somehow even now he feels like he still owes him somehow. And that it's time to make it up to him. This honesty, This outfit, His eyes... I can barely handle it.

So with Shancai, DMS agrees that he shouldn't torment her anymore and walks away with that Lei lighting behind him. What an angel.

Shancai makes it home to her parents who tell her that they're moving because her dad has a new job, and that most likely they'll need to move to a smaller place because they'll be investing their own money in the company. This reeks of foulness....

Shancai literally runs into DMS at school and he hands over books she left at his house. He's acting "normal" and they go back to their odd bickering ways. Meanwhile she sees a posting for a kitchen assistant position at a local restaurant nearby, and since they're so short-staffed, she starts right away. So first there's a pineapple, then a kiwi and now we're going to mix it up with Pillsbury Doughboy?

DMS shows off his pool table skills, and flaunts his ability to get over Shancai. Lei cruises in, in all of his beautiful coat glory. DMS says he's over Shancai, but is still mad at Lei and storms off. Lei - with his usual ethereal lighting - shares with F2 the truth about the evening, and how he almost fell for her, but wouldn't do anything to her because he wouldn't betray Ah Si. OK - I'll wear a team Lei jersey for now. He also contemplates that if Si learns how to treasure the person he likes, and realizes that he can't get everything he wants, then everything that happened will have been worth it. It does come full circle because when F2 asks why Lei won't tell Ah Si about this...he says it's because of something terrible DMS did in the past. It just goes to show that people may forgive, but they never forget. 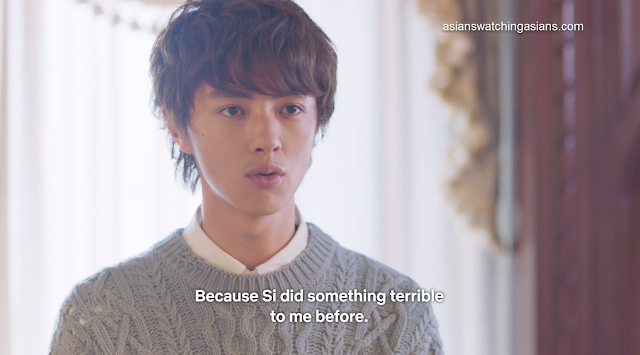 What an evil genius.