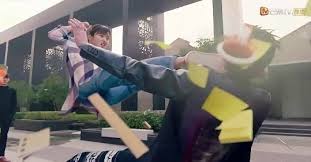 After you get past the the intro - you see the Matrix-inspired still of Shancai kicking Daoming Si in the head. Who is this girl? She starts to narrate about herself, her parents, her friends and you see her so excited to be starting at her dream college with her best friend. You learn about the mystique around F4, and then you have so many questions:

You notice things like Shancai's best friend who is in love with her wears Golden State Warriors high tops, which is the only cool thing about him.

Oh and when DMS knocks her in the shoulder...you start thinking things like "He just touched her! OMG - is that good, is that bad? He's pretty good looking when he doesn't smile."

Shancai is very sweet to have baked a birthday cake for her friend, and when the cake falls on top of him, the look on DMS's face is classic - and so is this line "if apologies worked, why would we need the police?". This is the first time you see his temper manifests itself in a physical way, and the first time Shancai insults him and calls him Pineapple head.

And then there's delicate Lei - who picks up the birthday card and hands it back to Shancai.

The infamous joker card shows up and you see her yelling off the rooftop, talking to herself and insulting F4/DMS. The first of many awkward exchanges with Lei, and you also meet the 2 phony, female frenemies.

When she brings the takeout to DMS, that's when the fireworks start. You realize how bossy and what a big D he can be, and how Shancai won't take his BS. He couldn't even look at her after he threw the takeout at her head. There - you see a sliver of his vulnerability and humanity, right ther.

Or course there's Lei to the rescue when Shancai almost gets accosted by 2 randoms on the street. Lei does his handstand move and you start wondering things like "I guess that would stop someone from crying because the tears would pool in their nasal cavity and that would be uncomfortable. And what ever happened to that ice blue sweater I thought I had, or when was the last time I wore my white pants?"

You see her determined to seek revenge against DMS, and the intensity of his stare is met with the rubber from the bottom of her shoe. The fall, the hair is epic, just like this love story.
Labels: Dao Ming Si Daoming Si Dong Shancai F4 Huaze Lei Meteor Garden 2018