How can DMS look that good on Ximen's phone? That's got high background photo wallpaper potential. 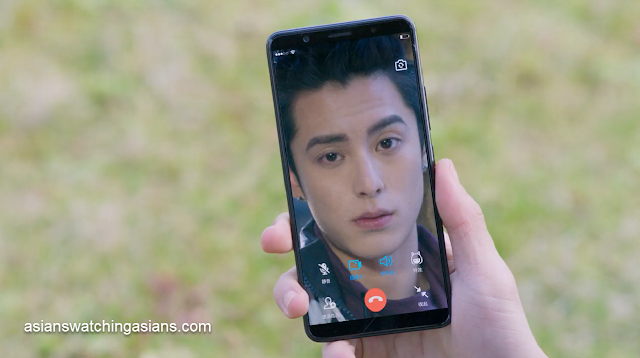 Love the bromance banter as they check-in with each other and DMS asks for Lei to question why Shancai likes him. I love Lei's response to him with "can't you figure it out yourself" almost as much as how much I love that Lei's eyebrows match his hair color. DMS asks Lei how she's doing and she just so happens to be walking by, and the urgency of DMS wanting to see her is just so dreamy. You can see just how much he misses her....

Back at the herb store, you realize Tian is actually the shop owner's grandson! He notices Shancai's school ID, and apparently she left it there as collateral because she didn't have enough money to buy the plant and Tian hears about her accident. He waits for her to finish work, gives back her ID and wants to take her out to dinner to thank her.

It's pretty annoying to see Shancai be so agreeable and chipper at this dinner. It's also pretty tacky that Tian takes her to a place where they eat out of aluminum trays. Way to impress - just like when he dolls out greasy lines like "I think we're so alike, and we have a pre-destined connection." There are more lines...and they're just as smarmy. 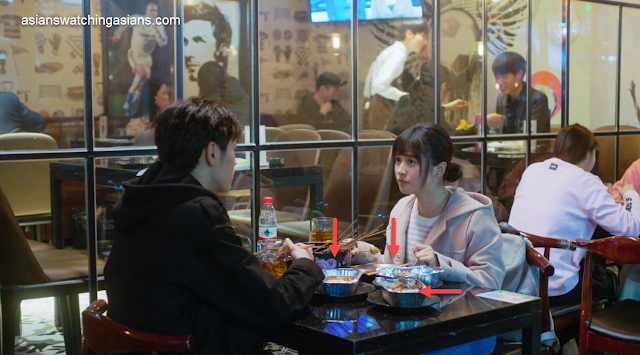 He keeps them coming as he tries to walk her back to her apartment, and Shancai doesn't seem to get his intentions. How can one be so dense?! You don't see him at first, but you hear DMS's voice cut into the scene like the demi-god that he is and you can't help but cheer that he's BACK! He's like a fairytale, little red riding hood and the big bad wolf all-in-one with that red-HAWT hoodie and that fab coordinated coat. #WINNING. 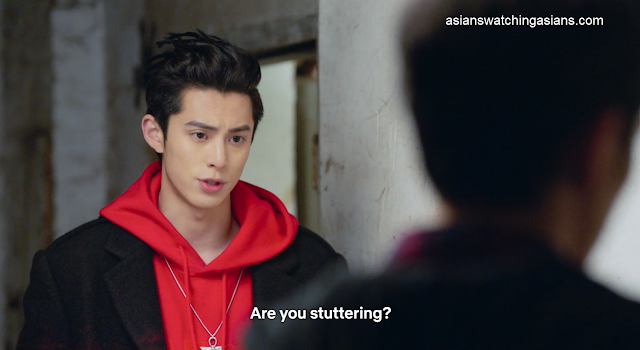 DMS exposes Tian and he tries to defend himself with his small mouth and fails. With his tail between his legs, Tian backs off and DMS follows Shancai back to her place. He starts laying it in thick, about how naive she is and they start arguing again just like old times. Sweet. 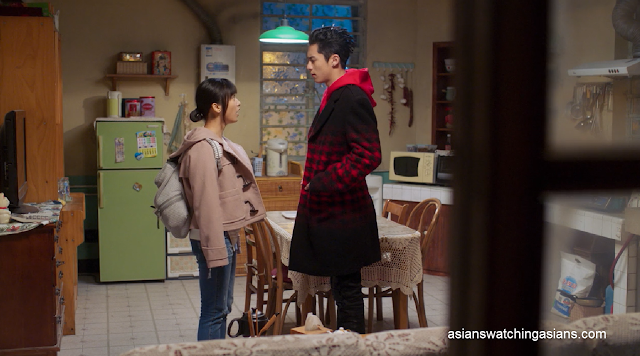 Shancai's mom starts Chinese-mom-ing and fussing over him, and Shancai looks mildly annoyed. You see DMS's complete outfit when he's sitting in between Shancai's parents. Black leather motorcycle pants. Yes, that works... Must be comfy if he flew from London to Shanghai in them... 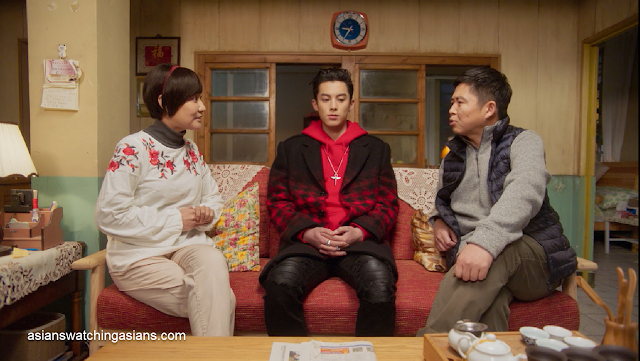 Especially when he smiles when Shancai's parents invite him to stay over because he's so jet-lagged. Who can resist this outfit and smile? No one. 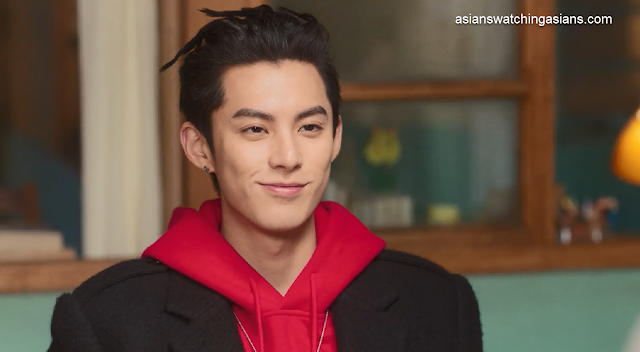 They're in her room - and she literally kicks him out of her bed and onto the smaller cot on the floor. (There's a touch of DMZ in that moment, sans heels.) He can't stop thinking about what Lei whispered to him at the airport and when he tries to talk to her, she freaks that he wants to do something inappropriate and reminds him that her parents are right next door. The best is when he says he "PUH-lease, you should refrain from doing anything to me." Yup. He can't get any cuter in those capris hugging that giant gray - what IS that thing? Elephant seal, dolphin, some video game creature? And why am I jealous of it? 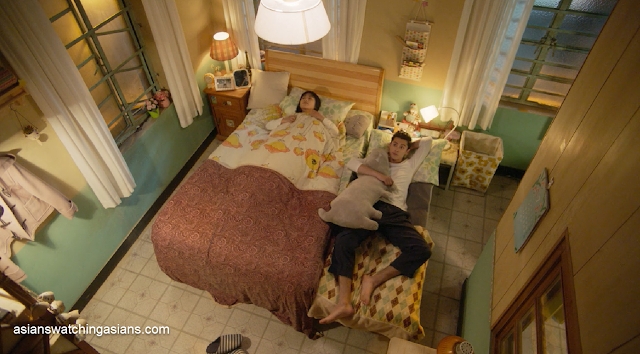 They do kind of have a heart to heart here, when he asks her what would have happened with her and Tian if he hadn't come back. She wants to know if that's why he's back, to tell her the truth and DMS gets all huffy and says he has better things to do. Then it's puppy dog cute when he asks Shancai if they went on a date, held hands, or kissed - and love that he leans in when he asks about the smooching. She smugly says no, and he seems satisfied. 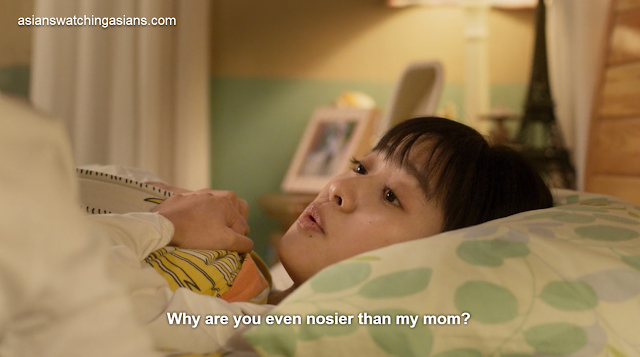 He can't even look at her and stares at the ceiling when he asks her how she's been and what she thinks of him not being here. That takes some meteor garden balls to ask such direct questions. And even when Shancai doesn't "get it," he then goes to further clarify if she felt more carefree or a bit sad. He dares to look at her and their eyes meet. She doesn't say anything, and potentially afraid of what she'd say - DMS is quick to do a "nevermind" roll over. Back to snugging that gray thing. Jealous again. 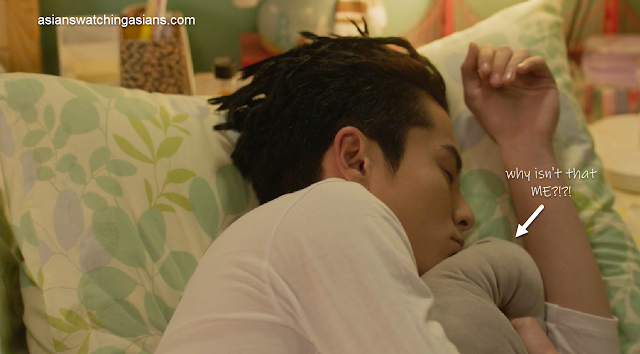 Shancai does seem serenely happy when she tells him good night. DMS is tossing and turning and sits up to admire a sleeping Shancai. His immaturity shows when he pokes her in the face, but she does look like a corpse in a very unnatural sleeping position, so maybe he wanted to check to see if she's still warm and alive. Who sleeps like that anyway? 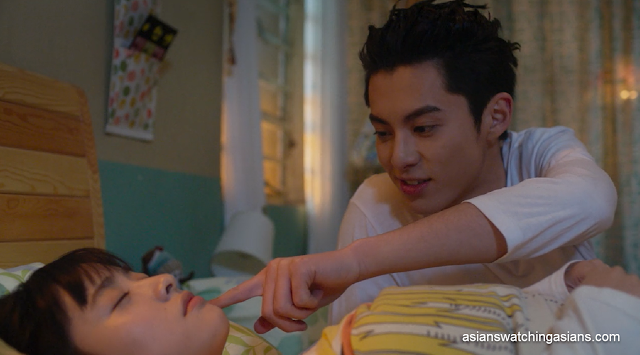 Rise and shine, it's morning time and Shancai is about to take a shower and is in a camisole when a shirtless DMS walks in. She wants him to wear her dad's clothes and one of the best lines of the episode comes from DMS when he says "I don't think I can carry the uncle-style clothes your dad wears." Not sure, don't sell yourself short my friend. I do agree that you have to squint really hard to see those self-proclaimed "perfect abs" which he hides behind Shancai's towel when her mom comes in and shuts the door to give them some privacy.

I think I see some contouring going on, but I'll let that pass. He's still a growing boy.

Whoa - if you're still squinting, you might miss that DMS is holding Shancai's hand when they're on campus. Actually, he's dragging her, but minor technicality. 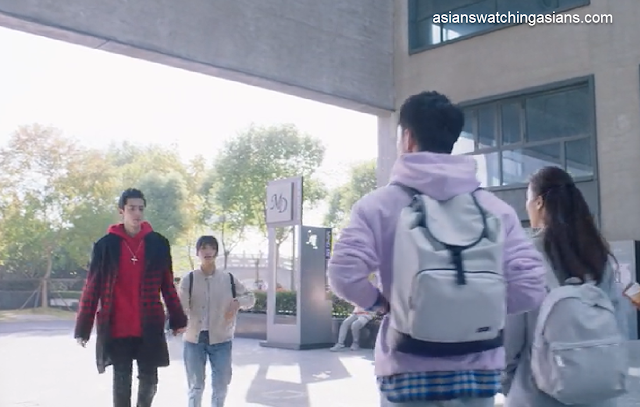 DMS is kill'n it with the lines in this episode, when he leans in and tells banana bestie that he slept together with Shancai, and caps if off with two pats on the shoulder as he saunters off.

DMS is back at home and F3 are back to welcome him. Who doesn't love a reunion? Ah Si apologies to Lei for the spiderman incident and F2 can't resist capturing this moment on their phone. I love watching Lei milking the apology for all it's worth... Ximen, why did you ruin the moment with the man-kerchief. Why, just why? This is not even one of Meizuo's WHY NOT moments. 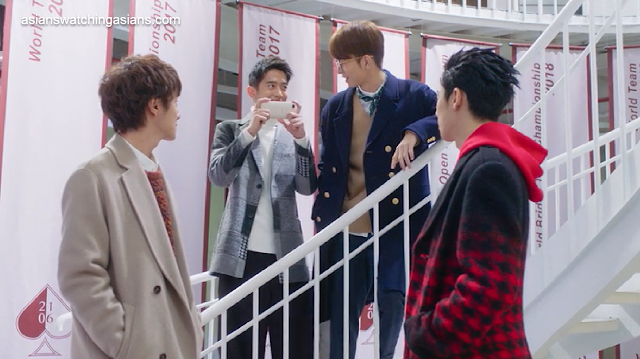 Makes me smile when F4 discuss the merits of a professor's statement. It's so clear how their personalities reflect their philosophical beliefs, and DMS is all about determination. No fear, until his sister calls and he can't face the wrath of DMZ. Sure she's pissed, but the bomb she dropped was that their mom is planning on being in Shanghai for his birthday and she prompts him to think about what he should do about sloth shirt-wearing Shancai.

Shancai comes from work after it's all good with Tian and find her parents under extreme stress. She finds out her dad lost a million yuan and was blinded by greed and good intentions. Unsure of what to do next, there's pound on the door and our hero shows up. Can't think of a better pick up line than "here's my credit card good for a million yuan and my password is 00000. Why don't you go ahead and use it" in the context of helping your family. Pure gold. And then to follow up with "this is my money that I earned in the stock market." Umm. Pure platinum. Shancai at first resists, but the fear of her father going to jail gets the best of her and DMS just puts the card in her hand. That's a power move. Unsure of how she's going to pay him back, he just tells her to come to his house after school tomorrow. Let the good times begin.

At his house, he introduces the idea of the contest with the 1M yuan prize money and there's a sweet scene when his phone has the details and she's hopping around trying to see it and he hooks his arm around her from behind to let her look. It's a Chinese cooking contest and as she reads, his face is mm away. I skipped the part when he's advancing towards her and she lamely crosses her arms in front of her chest like she's Wonder Woman. I can't stand it, but I guess it might be worth mentioning. 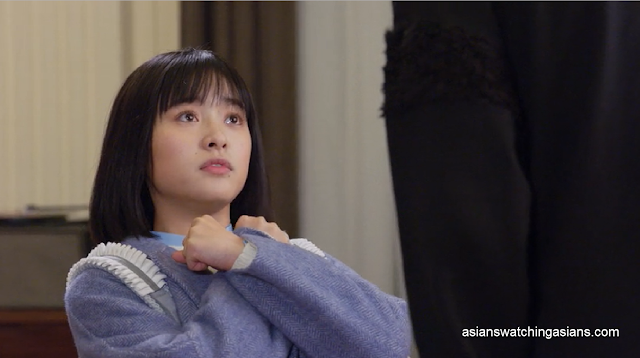 There's also a moment when Shancai runs around and puts both her hands on his chest to stop him, and you hear this farting sound and then what sounds like 2 drips of water. What's that all about? A case of bad diarrhea? Squeezing his man boobs? She quickly pulls back her hands, like he's on fire, because he is, and looks down. 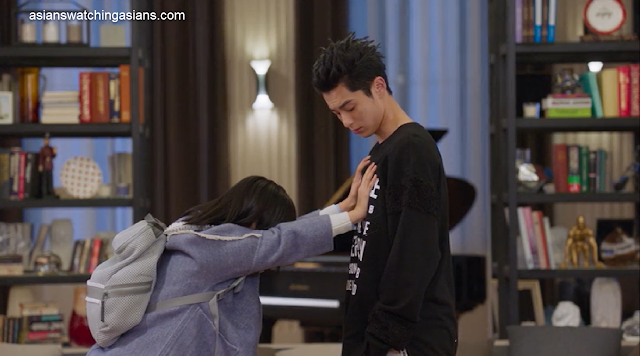 He picked the perfect way for her to pay him back, but then he mentions that there's interest. What a loan shark. She comes back when gestures for her with his finger. And the interest payment is a kiss on his cheek. ACCCKKKK. This is when we fall over.

She gives him a quick peck and runs out of this house like she's being chased. Silly girl - but maybe it's the diarrhea.

DMS catches F3 up with his plan about entering the cooking contest, and it's revealed that this contest is sponsored by his mom. It's all part of his plan to ingratiate Shancai to his mom, and they all love the idea. Everyone except DMZ who is back to help her train, and has faith that her brilliant teaching skills can make champions. According to DMZ - it's all about "feeling, FEELING, you know?"