Netflix Synopsis: When Shancai panics in the final round, Ah Si gives her motivation to make a Shanghainese dish with a creative touch that impresses the judges.

Lots of cooking shoptalk from the judges on the cultural aspects of the dishes against some John Willamsesque tense music.  We all wait for the judges to weigh in on the pastry round. High marks for Caina's entry and Shancai's plain flower pastry was saved by her love story inspired by DMZ's lesson on "feelings, ya know" winning the competition. I mean who doesn't love love? Meizuo is drooling over Caina and DMS pops out of his seat when Shancai makes it to the next round. He can't even contain himself and had to be restrained by F3. Too cute. 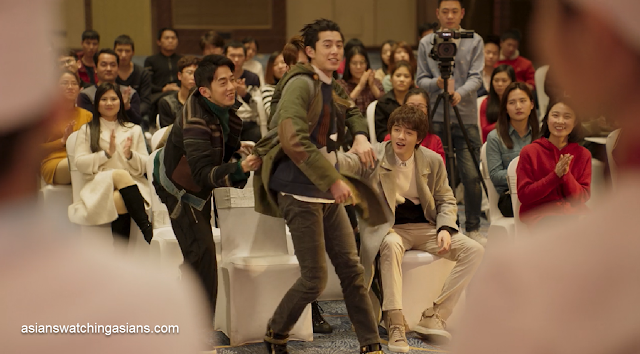 F4 go backstage to congratulate Shancai, and Meizuo makes his way to introduce himself to Caina.  She's probably not interested because Ximen is wearing that shirtdress that looks ridic and Meizuo is guilty by friend association. 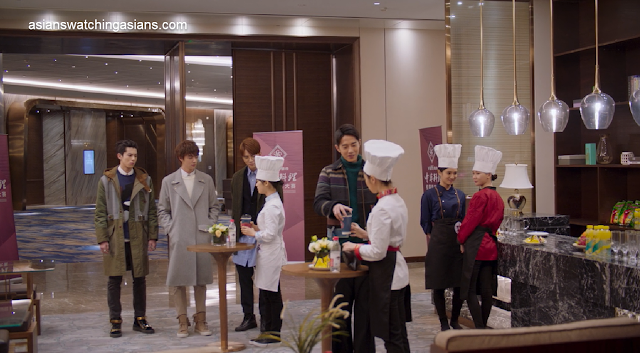 Somehow DMS lost his words when put on the spot to encourage her, and you can just tell how proud is of her. Again, too cute. 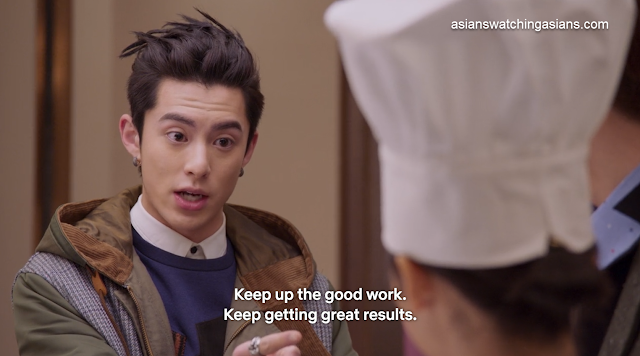 LOL. That's something my dad would say... Everyone laughs because they are thinking the same thing.

The most rigorous challenge is ahead, to make a dish reminiscent of their hometown in less than 45 min. Caina is calm, cool, and collected, in contrast with Shancai who looks confused, conflicted and concerned. DMS is stressed for Shancai and is panicking along side her, so he runs off and tries to get her attention. He's holding up a sign against the glass wall with 100 on it, and security is trying to remove him from the window. His killer looks and passion are just too dangerous for the general public. He pounds on the window, Shancai's mind goes blank and they have a telegraphic moment. 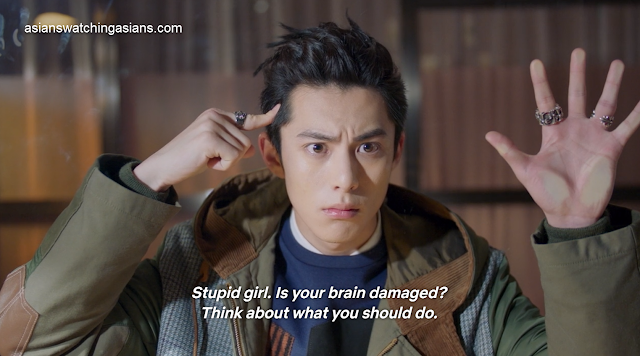 He of course saves her by being a source of inspiration as she reaches for a pineapple.

Oh - what's this? Caina killing Shancai with kindness and smiling through some fighting words like "you're going to lose to me, because I know what a dish taste like just by looking at it" Shancai doesn't quite take this lying down, but Caina seems so sure of herself, as she does her final inspection of her hand cut flower.  She could certainly serve herself a large slice of humble pie.

Shancai's dish is eight treasures of spicy noodles, and everyone's concerned that this dish is too pedestrian to be worthy of this competition.  She backs it up with how this dish really serves up comfort and revives her appetite when she doesn't feel well, and that it doesn't matter if the dish is complicated or not, as long as it can rise up to challenge and be distinctive in its own right - it's worthy. 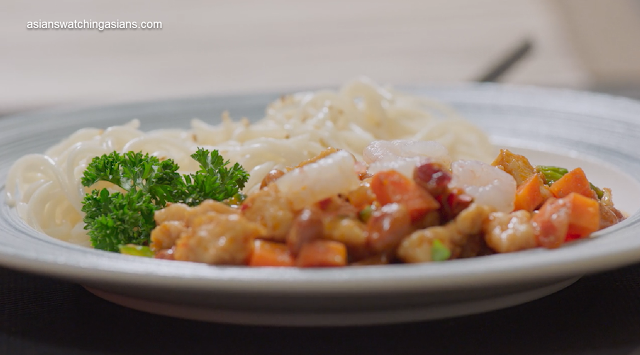 Her closing defense is centered around the fact that you won't ever get tired of eating "8 treasure spicy noodles."

Ok, I admit - the most beautiful girl at Mingde campus is distractingly pretty, dare I say even prettier than Lei. (Now those are fighting words...) 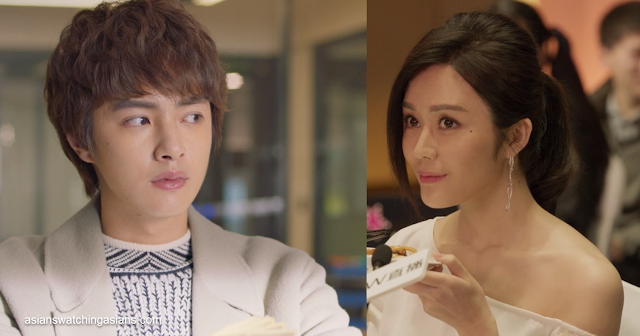 Shancai goes into detail about how the unique flavor of the dish is from pineapples and that she was inspired to add this ingredient from her personal experiences.  Her quirkiness doesn't result in the big win, but she does get recognition with a special consolation prize and half of the grand prize money.

Loving DMS's reaction to Caina's acceptance speech. He could care less about what she has to say... 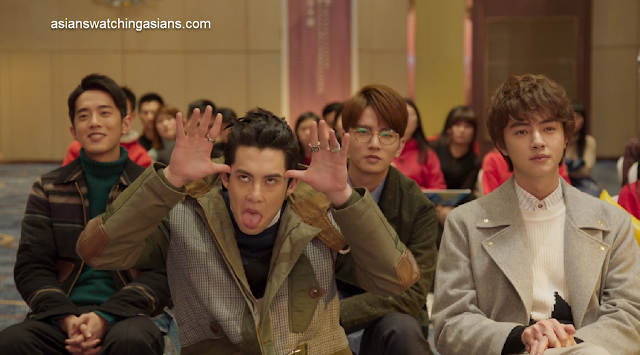 Us too. And really, who cares since DMZ says no matter what, she and her cold shoulders are down to PAR-TAY! 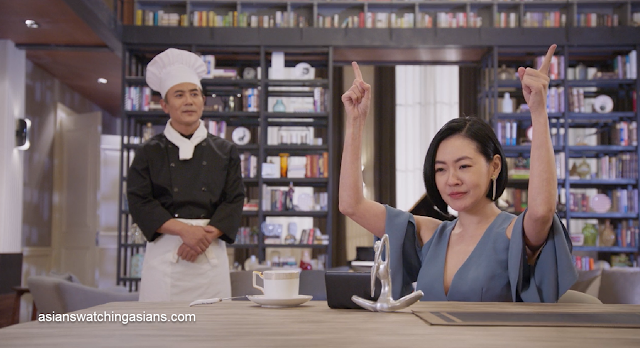 And it was worth it to see Ah Si's slow claps turn into a frenetic outburst of joy for his crush. 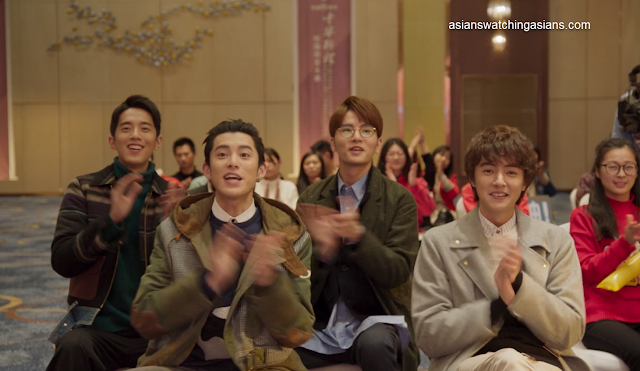 Shancai gracefully accepts the award and thanks DMZ, her good friends and reflects back that a few days ago she didn't feel brave enough to accept this challenge, but that thankfully there was someone who was there to encourage and support her without expecting anything in return. FINALLY she says something nice about DMS and the look of adoration from him is SQUEAL-worthy.  And then when he jumps up with his fist pumps? THE BEST. She's smiling so hard, that it hurts. So are we.

She may have also racked up some new fans... Isn't that her picture on this sign?!

People are calling Mama Dong for the "8 treasure spicy noodles" and it seems like things are on the up and up for the Dong family.  Back at the Daoming compound, the prize winning dish is served and DMS is the first to try it.  For the record, we agree with DMZ that this dish and basically everything should be paired with a good red wine. It's a big hit - and guess what, we like your sweater too Shancai. You are just #WINNING today.  And the jackpot is when DMS asks her to spend the day with him tomorrow. GAWD - did she just suggest that they all go out together, when he just asked her out on a date?  Luckily F3 all awkwardly had reasons why they couldn't make it, but I'm available. 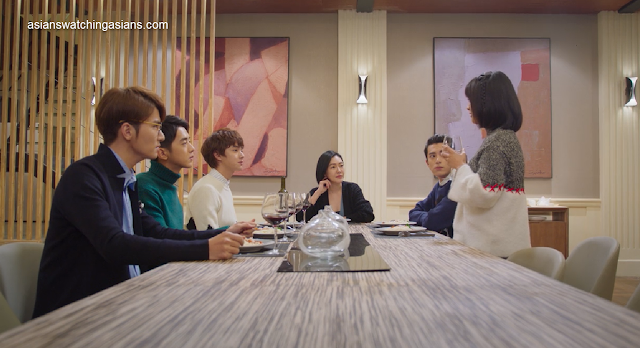 Not commenting on the commercial that Mama and Papa Dong make because in the real world - this would never pass legal - and everything in this show is So. Damn. Real. so I'm just going to ignore that. 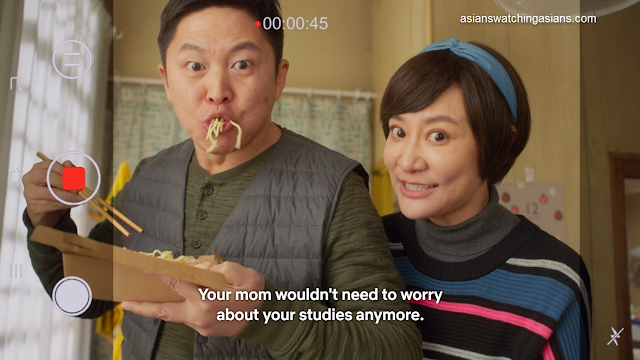 It's Date Day and Shancai rushes out and nearly runs over a little boy. He gives her this note from his mom that basically says he's yours for the day because I'm stuck at work. Sorry, not sorry. His fro is pretty note-worthy - but I don't think DMS is going to appreciate this third wheel toddling on his date. 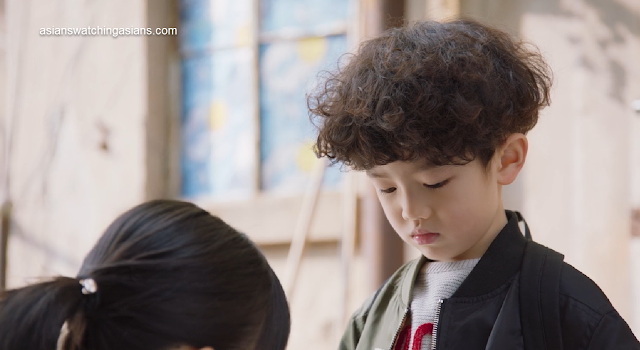