Netflix Synopsis: Lei returns from France a changed person and confesses to Shancai he's heartbroken about Jing. Shancai realizes she's not over Lei.

Shancai proves that she's a bigger person than most, covering up for Li Zhen and standing up for her in class. Lots of "ben dans" (idiot) thrown about as DMS gives Shancai a new phone. Not sure why she doesn't want it, since all he's trying to do is replace her broken phone. He threatens to smash her mom's phone, and she wonders how he knows that it's her mom's phone. He explains that he went to her house yesterday to ask her mom for her number. Awwww. Shancai seems annoyed, but the best part is that DMS says that her mom asked for his number, added him on WeChat, and asked him to take care of her. Strong work mom, strong. 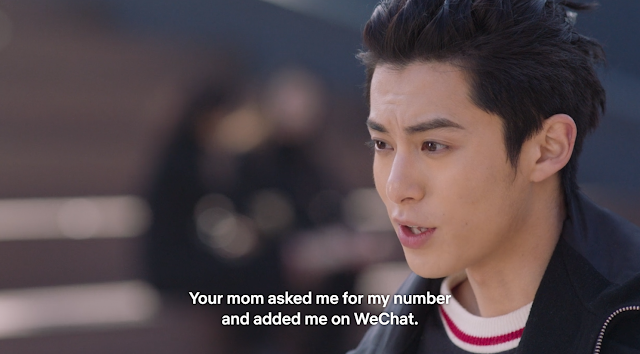 So he goes from being adorable to being possessive when he treats her like property again and tells her that he needs to be able to find her at all times. Shocking that Shancai doesn't take to this very well and counters with "I'm not a dog. Why should I listen to you". In an Americanized version, I'd imagine the comment to be more like "I'm not your bitch. Shut the F up" - but this seems much more demure. DMS remarks that of course she's not a dog, because they are more obedient. He's such a charmer.

F2 are on the sidelines, witnessing the lovers' quarrel and then there's a bonus. Lei's back - in all of his fabulous, long coat glory! DMS is quick to verbally piss on Shancai to mark his territory by proclaiming that Shancai is his girlfriend and of course she quickly denies it. Lei says "what a pity," lingering looks are exchanged and yes, the plot thickens.

Shancai returns home to a house cluttered with home appliances, courtesy of DMS. She yells at him for sending them, and bonus smooth-move points for DMS when Shancai says she doesn't want to talk to him, so he says he'll send a driver for them to meet up instead. 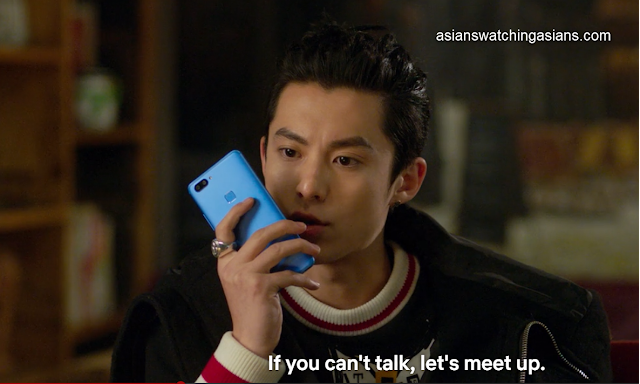 F3 reunite and wait for Lei and start discussing how Lei is so different now. Shancai shows up and now everyone has a date, even Lei who rolls up with KiKi. Hmm...Are you riding? Is Lei down for you always? Shancai spits out her drink when she sees Lei kanoodling with KiKi in the back booth. F3 suspect that something happened between Lei and Jing. YOU THINK? Shancai has enough of this awkwardness and wants to go home. She tells DMS that she came here to tell him to get all the appliances out of her house. That's pretty ungrateful, and then when DMS offers to walk her out, she insists that she can go by herself. Now that's just rude.

Flash forward to the next day when Shanaci sees Lei on the roof again. I personally would find it hard to be attracted to a man who wears tighter pants than me, but hey, I'm clearly team DMS vs Lei. So interesting that they both bring up each other's relationship biz at the same time, and Shancai says that the relationship with DMS is all his idea and she hasn't agreed to anything. Lei casually hops off the ledge and asks Shancai to be his girlfriend. 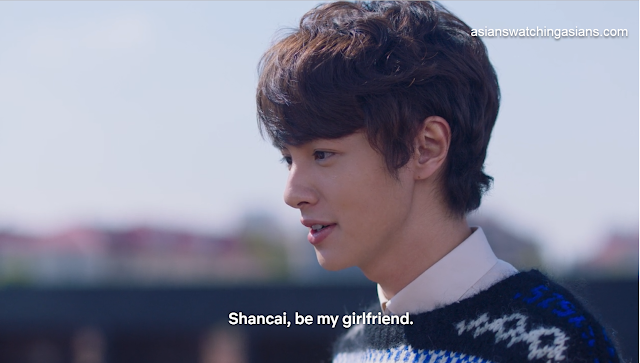 WTF?!? Where did that come from? "Am I not better than Si" - Whoa - check out the big kahunas on post-Parisian Lei. Shancai is in disbelief and asks for the real Slim Shady to please stand up, because this can't be Lei. Lei does a total mind bender and tells her that he's just kidding. No matter how sweet that dimple is when Lei smiles, that was pretty cruel. And then he switches back and says that he can't steal Si's girlfriend, after all, he's his brother and it's always bros over ___. But then Lei busts out another Machiavellian move when he asks if she's disappointed by that and suggests that they secretly date behind Si's back. Awkward. And then schizo Lei reverts back again and chides her for believing him again. This is Lindsay Lohan Lei. What is that dimple doing?

Cut to scene with DMS, hot glasses, white button down shirt under grey/black camouflagey sweater with boucle leather jacket - it all works. He grabs her by the arm, tells her that they've got to go. They're at the airport and Shancai has no idea where they're going. He's told her parents, her boss, he's packed her bag, he's taking her on a trip, AND he's rolling her luggage. Shancai where are your manners? Say "thank you." I hope he packed that T-shirt that says "I surprised this girl with a vacation and all I got was a nervous side-hug during turbulence." 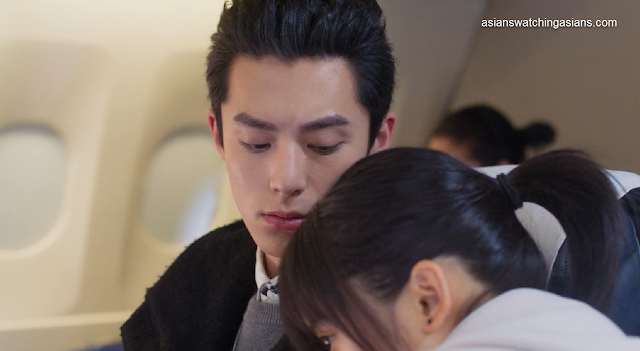 But that seems enough for him. Hard Swoon. ❤︎ 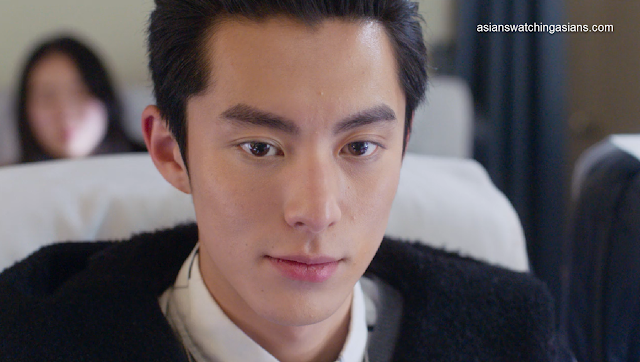 F4 roll into tropical paradise, all coupled up and ready to partay! DMS is like a pineapple hawk, scrutinizing every move that Shancai makes and possessively says "who said you could look at another man" when he catches Shancai furtively glancing at Lei. She self-righteously says that it's none of his business and asks if he's jealous again. Geez Girl. How much validation do you need? 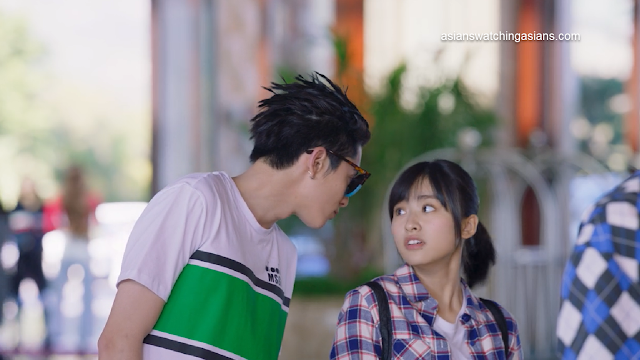 Just like you would have assumed, DMS has the best room in the hotel and Shancai seems stressed when she realizes that they're staying together. DMS shyly looks away in his 13 yr old middle-school picture day striped shirt, and says that they'll be in the same room but will sleep in separate beds. To end the awkwardness, Shancai's resorts to her go-to I'm hungry move.

Lots of "gambei" outside during dinner, with Meizuo wowing the table by chanting pi decimal numbers, and Lei shamelessly flirting with KiKi and her yellow-stained teeth, and making inappropriate comments that are suggestive about his feelings for Shancai. Loving Meizuo's side eye here. 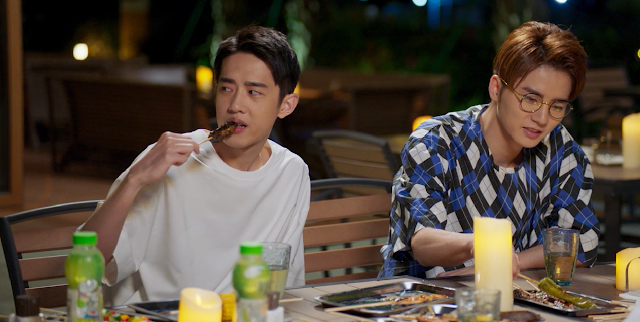 F2 again make comments about how Lei's come back from Paris as a real man. WTF does that mean? Do real men manipulate women and have no regard for their feelings? I expect more from you Harry Potter, especially when your fashion choices seem to align closer to the feminine side on this trip.

Back in the hotel room you see them get ready for bed and she freaks out when he sits on her bed and leans in. Better pull that comforter even higher, because GASP, your collarbone is showing and is sending him mixed signals. But leave it to DMS to say the sweetest line - to not worry, that he likes her and that before she likes him back, he won't do anything to her. When he says he'd never touch a woman without her consent, we nod in agreement and forget about episode 4. 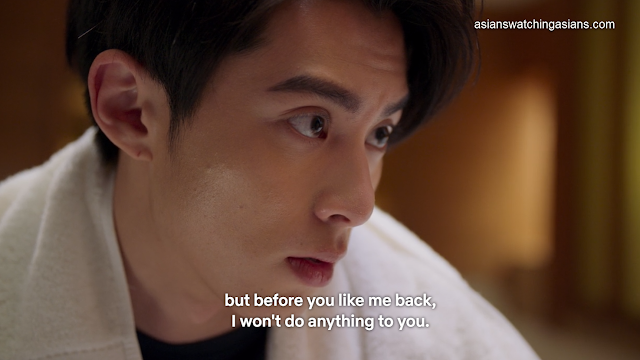 Kinda cute bedroom scene when she offers DMS to sleep "over there" although it's not clear if it's with her or not. He's so honorable when he dismisses the notion and suggests that she just tell him that she likes him. And how much do we love him when he says he doesn't know how much longer he can wait. So sad that Shancai's "Keep It Casual" shirt says it all.... 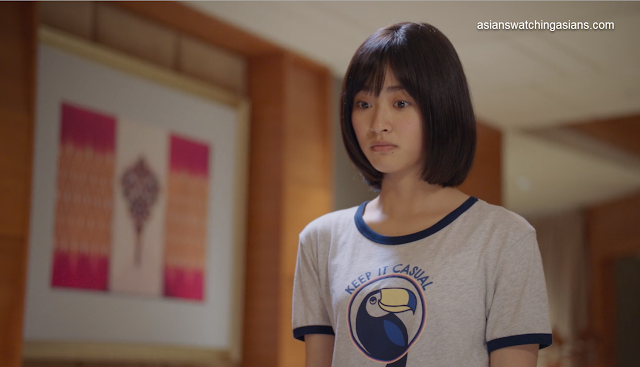 Shancai is restless and goes for a walk on the beach and sees Lei sitting on the sand, looking sad. She confronts him about his "real man" behavior and leave it to Shancai to keep pressing for details. He leans against her shoulder and confesses how hard it is to keep his sh*t together at all times. He wants a few min of comfort and asks for a hug, which she awkwardly gives. When Shancai asks why doesn't he seek comfort from KiKi, he responds with "I don't want to be touched by a woman I don't know." That is pretty deep for his current d-bag persona. She complies and he leans into that collarbone! Maybe it is so alluring when revealed. He tells her that he's devastated because Jing didn't really need him, and Shancai realizes that she never gave up on Lei. He tells Shancai about Jing and Paris, living in domestic bliss but how it didn't last and how helpless he felt. He thanks her for listening... and then you just know this episode is not going to end well. 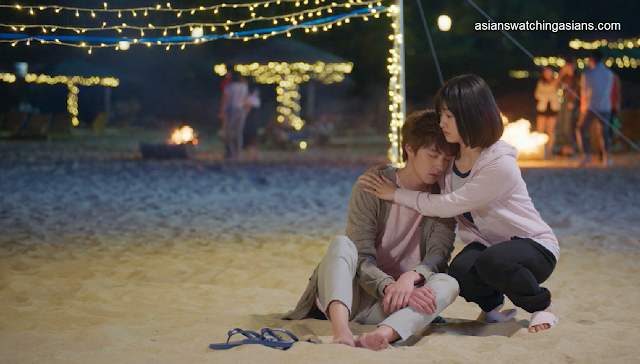 DMS is frantically searching for her with the help of F2 and they do come across Shancai walking on the hotel grounds, safe and sound. Physically maybe, but certainly not emotionally.

There's a F4 volleyball scene with the most clothed volleyball players I've ever seen on a beach, and you know what? They prob all look better that way. This is still one of my favorite MG moments, seeing them at the height of their bromance.

Best accessory award goes to DMS with his red sunglasses, which doesn't hide his annoyance when he confronts Lei and asks him if he ran into Shancai last night. There's a need for a re-vote for the reigning Sunglass King, because Lei is looking Owen Wilson Zoolander 2 fierce with his ombre aviators. 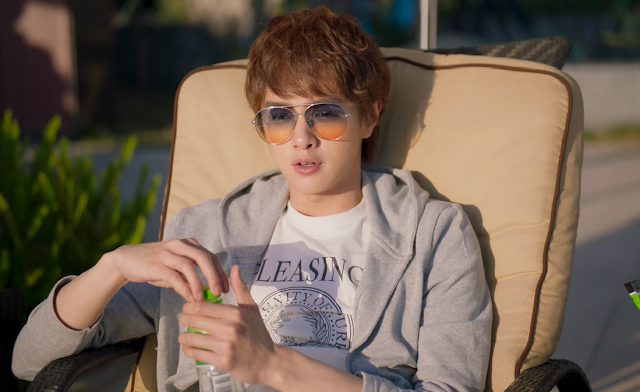 F2 see on social media that Jing is engaged to the son of the mayor of Paris. He plays it off that he already knows since this is big news in Paris - and why should he care? Why should he when he looks pretty amazing in those sunglasses. Now everyone knows why he's changed so much.

It's another sleepless night for Shancai and uh-oh - she doesn't have her Keep It Casual shirt to guide her. She sneaks out but DMS wasn't sleeping and your heart skips a beat and then sinks when his eyes flash open. Shancai spots Lei on the beach again and this time she makes the first move to comfort Lei who has been crying to himself. You can't help but feel sorry for him as you see that one perfect tear fall down his angelic face.

Out comes cheerleader Shancai and she tries to cheer him up but ends up crying and wonders why Lei can't be happier. 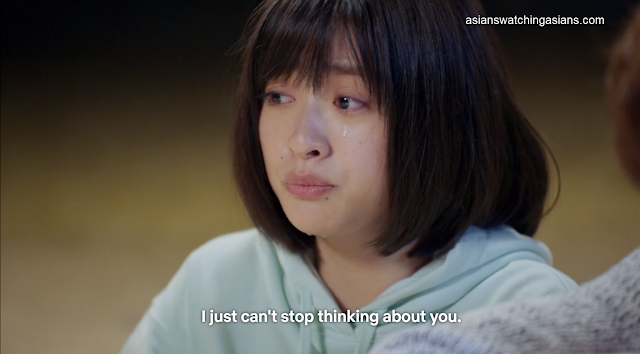 (meanwhile where is that barf bag from that flight? For me.)

So they're both crying and Lei goes for it. But the dagger is in this line: 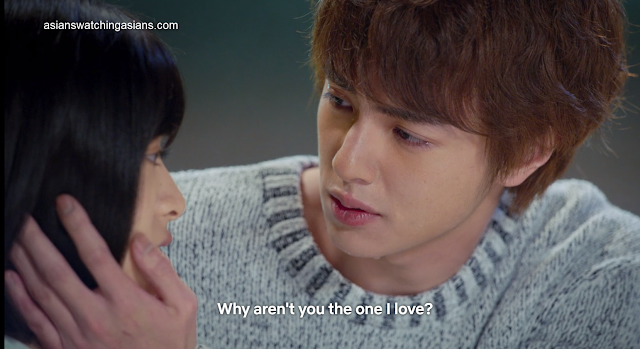 Wow. Just Wow. This is EXACTLY what you want to hear when you open up your heart to someone you think you like. But what's even more confusing is that he says this right before he goes in for the kiss. That's quite possibly one of the worst kissing set ups ever. Is it a pity kiss? Is it a I-Just-Told-You-How-I-Feel-Which-Is-NOT-Love-For-You-But-IMMA-Going-To-Kiss-You-Anyways-'Cause-IMMA-Real-Man kiss? It must have been quite a kiss though, because look at Shancai's reaction... 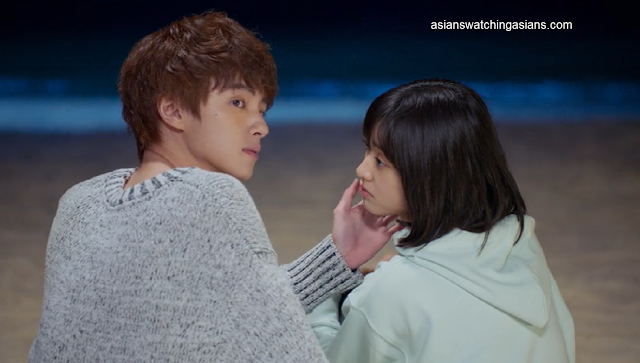 Huaze Lei, what is your problem?!?! So Painful.

But not as painful as the look on DMS's face when he sees them on the beach. Without saying a word he walks up to Lei and takes a swing at him. For a moment you wonder if he's going to swing at Shancai too. But he kills her with a look instead, because you know sometimes that hurts more.

Strangely she grabs him as he walks away, and for whatever reason she wants to tell him something important. Everything seems clear to DMS and he doesn't believe that there's anything left to say. I'm not sure Shancai's very convincing when she says "No, it's not what it seems like." What does it seem like? Shancai...hmmmm? Inquiring minds want to know.

DMS yells at her to not touch him, but then sincerely tells her that from the beginning that he's only had eyes for her, and only her, and challenges her questionable monogamous ways. 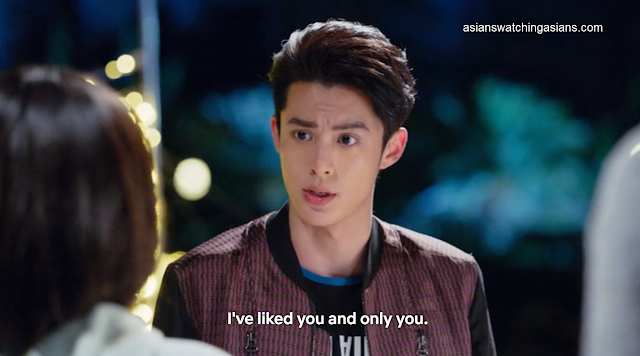 Moving forward, DMS wants to pretend that they don't know each other and goes home early to play a rough game of racket ball against himself, and Mr. Liu mysteriously places a call to an unknown person. He's so incredibly hurt, and we are too.