Netflix Synopsis: Jing makes a shocking announcement about her career at her 24th celebration. Shancai decides to help reconcile Jing and Lei.

Jing and Lei do the ET phone home touch and start slow dancing at her birthday. You see flashbacks of their childhood relationship as they waltz across the floor. And the best part of this episode happens within the first 5 min, when DMS stares intently at Shancai as she watches Lei and Jing sashay across the room.

Ladies and Gents - this is why we watch we show.  Like they say - get you someone who looks at you the way Daoming Si looks at Shancai. And if he looks like Daoming Si, even better. 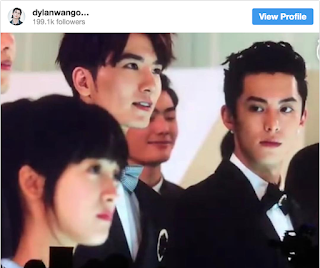 Lei wants to say something, but Jing cuts him off and says she knows, and leaves him to announce that she is going to renounce her life of luxury, give up her position as the family heir and help the poor and needy. She's leaving for Paris and going to live a life of purpose, which apparently conflicts with having beautiful clothes. She wants to be herself, and in dramatic fashion takes scissors to make a strong statement - by cutting her hair.  Lei clearly upset storms off and you see him cry and she apologizes because she acknowledges that the little thing he wanted to say, was something that she couldn't agree to. That cut deep.

Shancai gets drunk and DMS accuses her of eavesdropping. They exchange insults until Shancai vomits her champagne wishes and caviar dreams into this suit jacket.  That's never cute, by the way. Like a champ, she wakes up dazed and confused and her mom tells her DMS took her home.

Banana bestie and Shancai catch Li Zhen up with the party details, wondering why she's being so distant. Shancai sees DMS at school and before we get into that exchange. Let's just take a moment to appreciate his exquisite facial features, shall we? Should we do a close up here? Why yes we should. You're welcome.

So he self righteously asks her if she has anything to say, and she also throws it back at him that he hasn't apologized for what he did on the rooftop. Fair enough. She does eek out an insincere "xie xie" and then he grabs her back by the collar. Whoa there. He tells her that she was drunk and must be happy that Jing is going back to Paris so that she could be with Lei?  He asks it in the form of a question and kind of knocks her in the shoulder as he walks away. For whatever reason, that was kind of haaaaawt.

Shancai and Lei have their rooftop moment and she is quite taken by how depressed he is.  She encourages him to fight for their relationship and even tries to convince Jing to stay for Lei.  Jing drops some ice bombs when she says "to me, love isn't the most important thing in the world." what's really important for her is to go after her dream. I admire that ambition - but Girlfriend to Girlfriend: don't wait too long, because before you know it - you'll be wondering if you should be freezing your eggs or not because work won't keep you warm at night, and/or take you home after you vomit.

Lei is pissed at Shancai for intervening and tells her to get lost. Ximen, Meizo, DMS, Banana bestie and Shancai are all at the airport to see her off.  DMS is so charming when he says - "why do you look so sad? You're already ugly. Looking sad just makes it worse." Shancai sincerely asks him if he has someone that he likes. (And it's so cute when he seems slightly taken aback that she would ask him this so suddenly). Because if so then it's ok to see them happy from a distance. He retorts "how stupid must you be to say such a thing. If that's the case, it's as good as nothing. If you died tomorrow - would you live a lifetime of regret? If you won't say it, do you expect them to drill into your head to see how depressed you are?" Again - the contrast here is significant. He goes from insulting her "ugly" face - to dropping life knowledge bombs on Shancai. BOOM! Even she's surprised.

Jing and her fabulous sleeves roll up to say goodbye and the crew wishes her the best.  She tells F4 to take care of Lei and to stop bullying Shancai. Lei's absence is noted and you see Lei show up at the airport and admits that he was hiding behind a pillar. Shancai lays it in thick, as she scolds him for not manning up and going after the person he likes. This is where again you see DMS look at Shancai with his adoring glare.  That's when Lei whips out his ticket to Paris, and he can do no wrong wearing that beautiful green/grey coat. The bromance support is endearing and you see Lei kiss Shancai on the head as a thank you, which riles up DMS. Again, haaaawt… I can't help but wonder though, does Lei know what he's doing?

As they watch the planes take off, F2 contemplate the mysteries of love. You start to get more of an acute glimpse of how self-sacrificing Shancai is, as she really puts a priority on other peoples' happiness over her own.  You see DMS unhappy to see Shancai upset, and he approaches her and propose that they date, just as a plane roars overhead. It isn't clear if she hears him or not, but she does ask him to say what he just said again.  Too tough to be that vulnerable, he accuses her of being deaf and he can't muster the courage to say it again and storms off in frustration. Timing is everything, people.

Caught by his friends looking up a love potion, Ximen and Meizo assure DMS that they are the love doctors he needs. Their golden rules for dating:

This scene is particularly cute because DMS is earnest in wanting advice from his friends, and they take it very seriously, not a hint of mansplaining at all. In the role-play scene, the male leads hold hands, and dance and homophobic vibes are no where on set.

The crash course in dating ends when they say "a date is when the souls of a man and woman have an intimate conversation. A perfect date is the best compliment you can give a girl, and you're going to become the most memorable man in her life." Now this takes it to a place of maturity that DMS is not comfortable with. He responds in his 4th grade manner by proclaiming that it's all "Gross." Ximen and Meizo tell him how pathetic he is and DMS just says "yes - that's how I am." I love guys who have a strong sense of self-awareness. He wants to know if things can be simpler.

Oh DMS. With your fine features - anything is possible.

SO Ximen sums it up in 4 words. Play Hard To Get. I struggle with this one, because I know you're not supposed to hate the player, but hate the game...but life's too short.  However this simple path also seems to be too complicated for DMS.

The episode ends with DMS calling out Banana bestie and Shancai on the school bulletin, broadcasting their poker challenge. BB is all over it, but Shancai is less confident. Scared, but determined they enter the Poker room and face F3 (Lei's in Paris).